Great coffee in the state of North Carolina is nothing new. The Raleigh-Durham-Chapel Hill area—often referred to as the Piedmont, or “Research Triangle”—has proved itself as a major national hub for cafes and roasters in the 21st century, with an influence extending far beyond the state’s borders. But travel a few hours southwest to the city of Charlotte, and you’ll find a city with a coffee scene totally its own. Queen City has made massive strides in the specialty sector just in the last 15 years, and today is home to a collection of great cafes on par with any city in the American South.

Trail Blaze Coffee Academy founder Brady Butler, who started as a barista just as the evolution was beginning, has seen it all. From the early days of events and small cafes—think  “20oz dry cappuccinos”, he recalls—Butler has watched as the scene in Charlotte has grown tremendously. He characterizes this growth as something organic, born out of “strong neighborhood connections,” and its story is sustained by local cafes, owned by the same folks who cut their teeth in the original circles. Many of these career third wave folks in Charlotte have begun roasting themselves or investing in a growing number of local roasters, while keeping regional relationships strong.

The donut-hole nature of Charlotte’s geography, which circles around the commercial Uptown, makes supporting local a natural choice. From artistic NoDa to hip Plaza Midwood and historic Enderly Park, many cafes are built on the ethos of the neighborhood where they are located.

We’ll visit six Charlotte standouts for this guide, but there’s always more brewing. If you’re in the area, check out the acclaimed new Archive CLT, a Black-owned vintage book and magazine shop with great coffee and tea, and try to time your visit with the annual No Filter Coffee Fest, recently nominated for a Sprudgie Award and helping to set an inclusive direction for coffee in the southeast.

Want a home away from home? You’ll find it in Central Coffee Co., which South Charlotte native Jimmy Kleto opened with his parents in 2009, in the former convenience store his grandfather bought in the 1960s.

The pandemic couldn’t keep their community away. During lock-down, the Kletos released a Zoom background with Central’s mint-green walls, Louisa says, “in case anyone was missing them.” The new work-from-home crowd loves the laptop-friendly community tables, and in the aftermath, “very few regulars haven’t returned.”

In the aftermath of the pandemic, the Kletos are considering reopening their now-closed South End cafe and building out a wholesale business that reaches beyond Queen City thanks to their partner, food and bev retailer Vibe NC. They’ve put their Innovation Grant from the City of Charlotte towards making merch and expanding their food menu to include vegan, gluten-free options from local vendors like True Flour and Crust Punk Baking.

“When we opened in 2011, my wife Miracle and I didn’t know we were starting something so new,” says James Yoder, co-owner of Not Just Coffee (NJC) and Night Swim Coffee. “At the time, pour-overs or the now-ubiquitous EK43 grinders were nowhere to be seen.”

NJC has since grown into six cafes around Charlotte. While each offers a unique experience, all are driven by a “clean, design-forward aesthetic” and use La Marzocco machines, with Night Swim Ultraviolet blend as the house espresso and Immersion as the house filter, with rotating single-origins on pour-over and espresso. The caramel latte, thanks to a recipe Yoder developed 12 years ago, is NJC’s most popular.

So why “Not Just Coffee”? The Yoders brainstormed the name with the dream of drawing non-coffee drinkers too; James says it reflects the community and creative focus of their origin. The not-coffee menu includes classics like avocado toast alongside “an absolutely fantastic BLT with avocado,” and sources from local farms and bakeries whenever possible, James says.

And about that community? Hosting events like jazz night, art openings, and women’s arm-wrestling competitions is an integral part of the cafe chain’s identity the team hopes to restore post-pandemic.

In late 2021, the Yoders joined forces with Todd and Erin Huber, founders of Undercurrent Coffee, to launch the Night Swim roasting venture, which now supplies all Not Just Coffee, Undercurrent, and Night Swim cafes.

Aside from being a Charlotte staple, says James, “Not Just Coffee is our baby.” He anticipates this will stay consistent as they grow Night Swim.

The current evolution of roaster/cafe brand Summit Coffee Co. began with intentional franchising, which CEO Brian Helfrich introduced after taking over in 2011. “We’ve been trying to do specialty in an accessible way,” says Helfrich, sitting in front of a light in the shape of the phrase find your summit. “To be successful, you need to invite people to be a part of the process.”

Customer-focused from the outset, the Summit team sees value in local cafes having local ownership—like Summit Coffee NoDa’s John and Melissa Varvaro. After living in NoDa for 16 years, says Melissa, “We couldn’t turn down the opportunity to support our own space in the neighborhood.”

The NoDa cafe was designed by Tyler Helfrich and showcases local artists that reflect the diverse, eclectic community. “There is a familiar Summit touch and feel to our cafe but with a color-outside-the-lines NoDa vibe,” Melissa says.

As a roaster, Summit prioritizes strong producer relationships, sourcing 90+% of their coffee from existing partners, 62% of whom are women. “Customers know they’ll get good coffee,” says Chief Experience Officer Dora Callahan. “How do we surprise them with a great experience?”

At Summit cafes, you’ll find an approachable menu with customer favorites like the 16oz latte (with 24oz iced drinks on the way) and women-produced Basecamp blend batch brew available at a lower price point than the featured batch brew. Plant-based milks have no upcharge.

“We have big ambitions but never to a point where we lose sight of the customer experience,” Helfrich says. Sustainability is an important part of this journey; the roasting operation became climate-neutral in 2022. Summit has 10 locations as of 2022 and is rapidly expanding in the southeast.

Tony and Becky Santoro co-founded Enderly Coffee Co., one of Yelp’s 2022 “100 best coffee shops” in the US, in 2012. Over the past decade, Tony—a former Title 1 teacher who started out selling air popper-roasted coffee to churches—became a SCA-certified roaster and barista and formed his “intentional” wholesale company around the tagline, “People First. Coffee Always.”

Perceiving that the typical third-wave experience lacked hospitality, Tony decided to bake approachability, quality, and community into the DNA of his brand, named for the historic, majority-Black neighborhood of Enderly Park where it’s based.

The cafe is a bright, clean space featuring local art, where staff have free reign over the music and a cup of their top-selling, dark roast State Street Blend costs just over $2 cash. It’s situated in a ‘40s-era grocery store, where Tony imagines nearly every local once set foot.

“We are joy dealers, facilitating an experience with a goal to make your day better,” Tony writes on Enderly’s insightful “Bean Blog.” Their washed Papua New Guinea, with tasting notes of lemon and honey, does that for me—but Tony humbly deflects my compliments. The bridge he’s building towards the well-rounded, approachable specialty coffee his customers want doesn’t necessarily begin with lemon notes.

To ensure customers enjoy coffee to their tastes, the team encourages questions at the register. “Our job is to blow their mind,” says Tony, and Enderly regularly accomplishes this with their Honey Bee latte (made with hello honey), rotating single-origins, and seasonal flavors like pumpkin pie and salted maple.

“I’m filled with gratitude to be here after the pandemic”—during which Enderly launched a successful Friday home delivery program in partnership with local bakeries—“and for all our staff,” Tony says.

I first encountered HEX’s natural Indonesia with tasting notes of blueberry wine and earl grey at No Filter Fest. It was a “How is this coffee?” moment—turns out, that’s their thing.

In 2015, HEX was a popup, which served as a good opportunity to share ideas with other Charlotte coffee brands and grow together, says Tanner Morita, co-founder and Director of Coffee. The Roastery, their main production space and espresso bar, opened in 2017.

The brand’s tagline “POINTED TOWARD PROVENANCE” serves as their barometer for selecting coffees that show terroir and roasting for vibrancy and sweetness. “Our main goal is to be a progressive voice in Charlotte coffee,” Morita tells me. “We wanted to push specialty forward, and present powerfully vibrant coffees in a market that was, at that time, not familiar with this style of uniquely fruited coffee.”

HEX’s minimalist, architecturally-minded aesthetic is designed to “let the product speak for itself [and] show the incredible work being done at origin.”

At their South End installation Stablehand, a sister concept that combines HEX Coffee with the Good Bottle bottle shop, you’ll find coffee shots—filter coffee through a La Marzocco GS3—instead of pour-overs. Customers gravitate towards bright tropical flavors, and the rotating list of filter and espresso means there’s always a new experience (including seasonals like a rich and buttery Kabocha pumpkin squash latte).

HEX will soon open a new flagship cafe with a Modbar, full-scale restaurant and natural wine bar, “to put provenance forward,” says Morita. Beyond putting coffee front and center, the cafe will also showcase the local food community and the team’s ventures into natural wine. 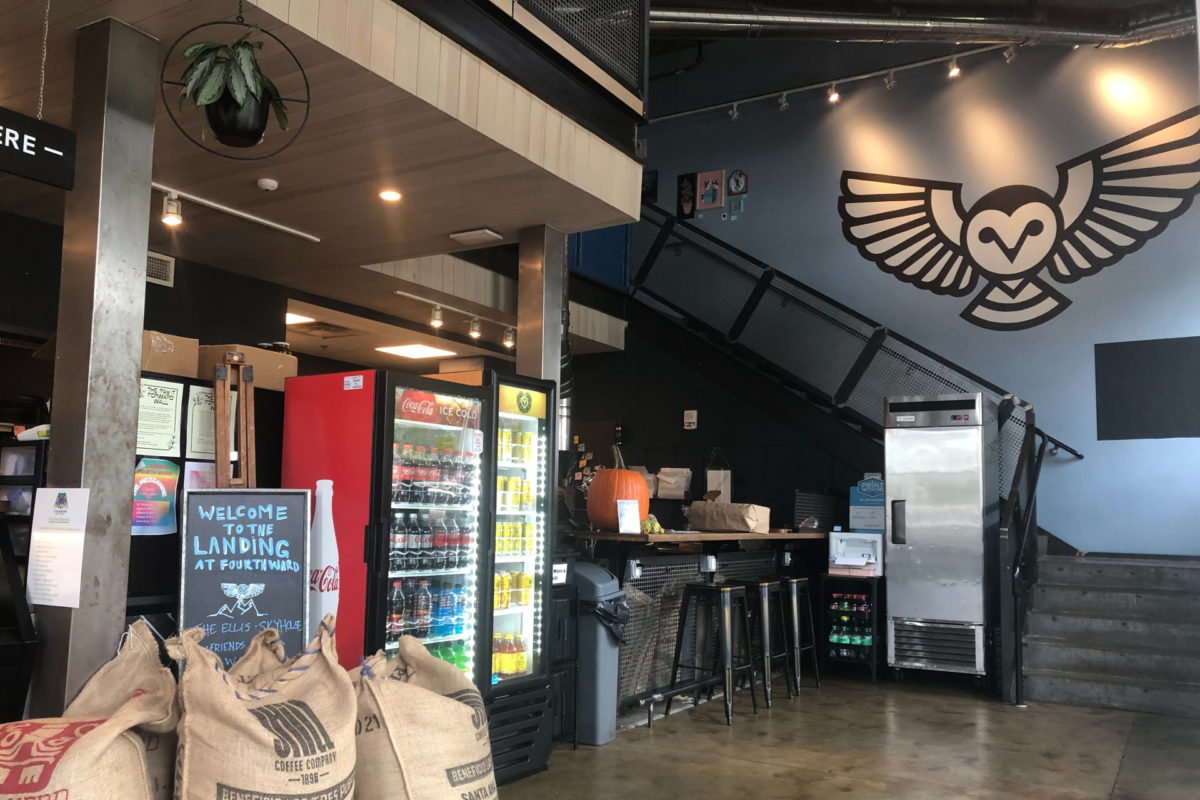 Queen City Grounds (QCG) was founded in 2017 by childhood friends Adam Hummell and Paul Waggoner, a founding member of Between the Buried and Me and owner of sister company Nightflyer Roastworks, as a small corner coffee shop. It’s since grown into three locations, including in 4th Ward, South End, and Wesley Heights, and offers in-house, small-batch roasting, beer, and wine.

For me as a recently diagnosed celiac, QCG’s creative, accessible food menu and knowledgeable staff stands out. I got a kick out of seasonal drink names like the “Basic Witch” and “Chai Day the 13th.” My “Is It Pronounced Syrup or Syrup?” featured homemade brown sugar syrup and QCG’s signature Night Owl espresso blend with gluten-free oat milk.

QCG’s focus on community and inclusivity reflects their “Core Values,” which are prominently displayed behind the bar at 4th Ward and encourage staff to “be genuinely hospitable,” “be collaborative,” “be stoked,” and “stay grounded.” There’s even a “Pay It Forward” wall, where you can claim a drink paid for by a previous patron.

The original 4th Ward shop is a big industrial space designed by Cluck Design Collaborative with a long coffee bar, exposed ceiling pipes, and black, silver, and wood accents. QCG’s logo of an owl with spread wings looms large over the stairs to the mezzanine. Local art, including watercolors made with Nightflyer coffee grounds, adorn the walls above a mix of tables, stools, and comfy chairs.

QCG brings the personality down to the details (read: the red “86’d” icon denoting a sold-out dish on their menu screen), and is a space that invites you to #StayGrounded—and stay awhile.

All photos by the author unless otherwise noted