Coffee plants in an agroforest system. All images courtesy of Soil Symbiotics.

Throughout Latin America, coffee-growing regions are quickly becoming hotter and drier while at the same time losing substantial tree cover.

Globally, coffee farms cover an estimated 11 million hectares of ecologically sensitive land. Many of these farms are the last bastions of standing trees in landscapes that would otherwise be deforested and dehydrated.

As part of an integrated agroforestry system, coffee trees can play a key role in preserving and expanding tree cover, and maintaining and repairing regional water cycles.

This is partly because trees and forests create and maintain their ideal conditions by actually producing rainfall. Meanwhile, coffee has shown the ability to thrive as part of a forest-like system.

Coffee Wants to Be in Forest Systems

Contrary to other commodity crops like corn and soy, which are ecologically unfit for the fields where they’re planted, coffee is the ideal crop for most ecosystems in which it grows.

As an understory species, coffee trees prefer a canopy of shade above them. They grow most vibrantly within a web of companion plants among their drooping branches adorned with waxy emerald leaves and bright red cherries. Coffee trees offer the unique possibility of planting a productive crop within in a forest-like system and with complementary multifunctional trees like hardwoods, nitrogen fixers, fruits and nuts. 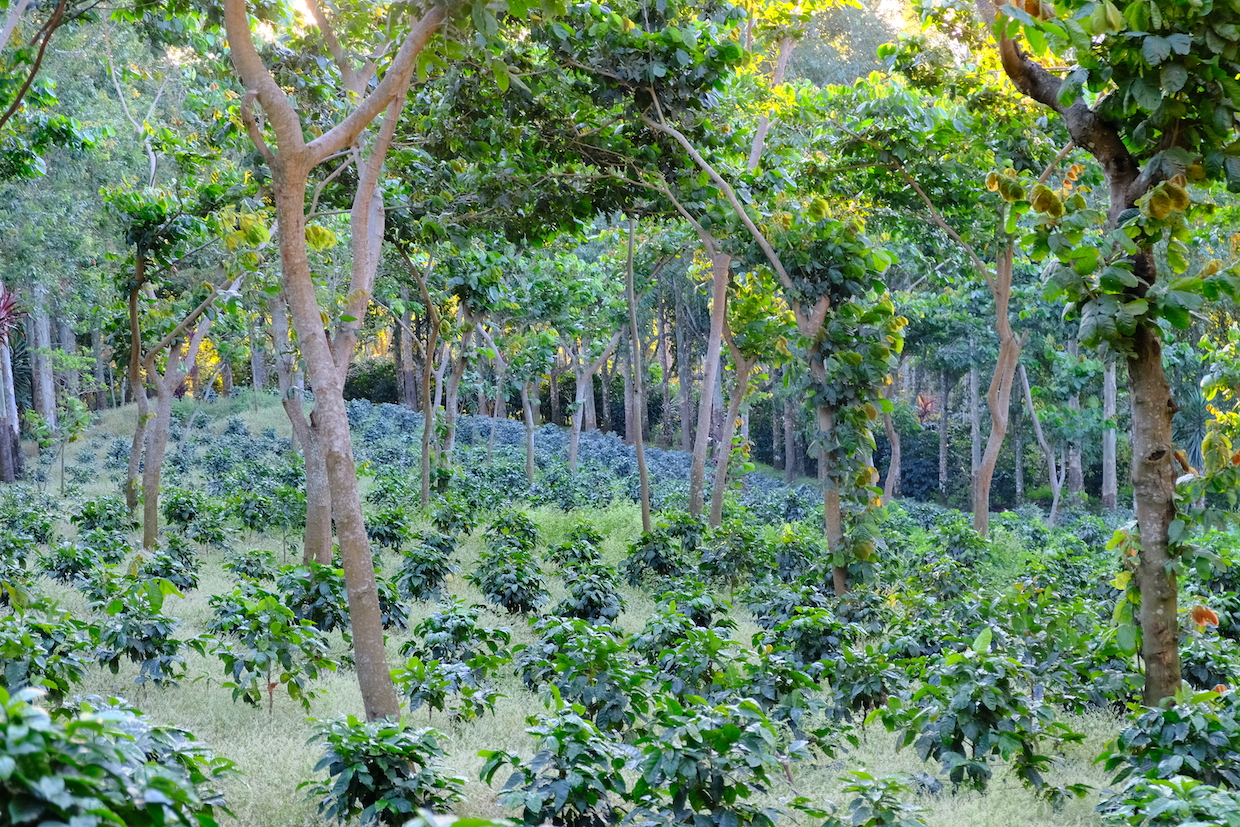 However, these systems are few and far between in the coffee sector, which has gravitated more towards full-sun monocrop systems for maximum short-term productivity.

In several coffee-growing countries, coffee trees represent a large share of the remaining tree cover. Between 1970 and 1990, approximately 50% of the shade trees associated with coffee farms in Latin America were lost. Globally, coffee farms have lost 20% of their shade trees since the mid-1990s, and countries like Costa Rica and Colombia lost between 50% and 60% of shade tree cover.

Loss of shade is also often accompanied by the increased use of synthetic fertilizers and pesticides, further disturbing the ecology of these areas.

The dominant narrative in the coffee industry is that global climate change is the primary culprit leading to disruptions in seasonal climate patterns or rainfall in coffee-growing lands. However, a closer look might reveal that many of the adverse weather conditions farmers face result from the loss of tree cover and biodiversity at the local level.

The textbook description of the water cycle presents the ocean as the primary source of condensed atmospheric moisture that ultimately falls as rain. Missing in that definition is the role of trees as veritable water fountains, pulling water up from the soil with their extensive root systems and releasing moisture into the atmosphere through the microscopic pores of their leaves. 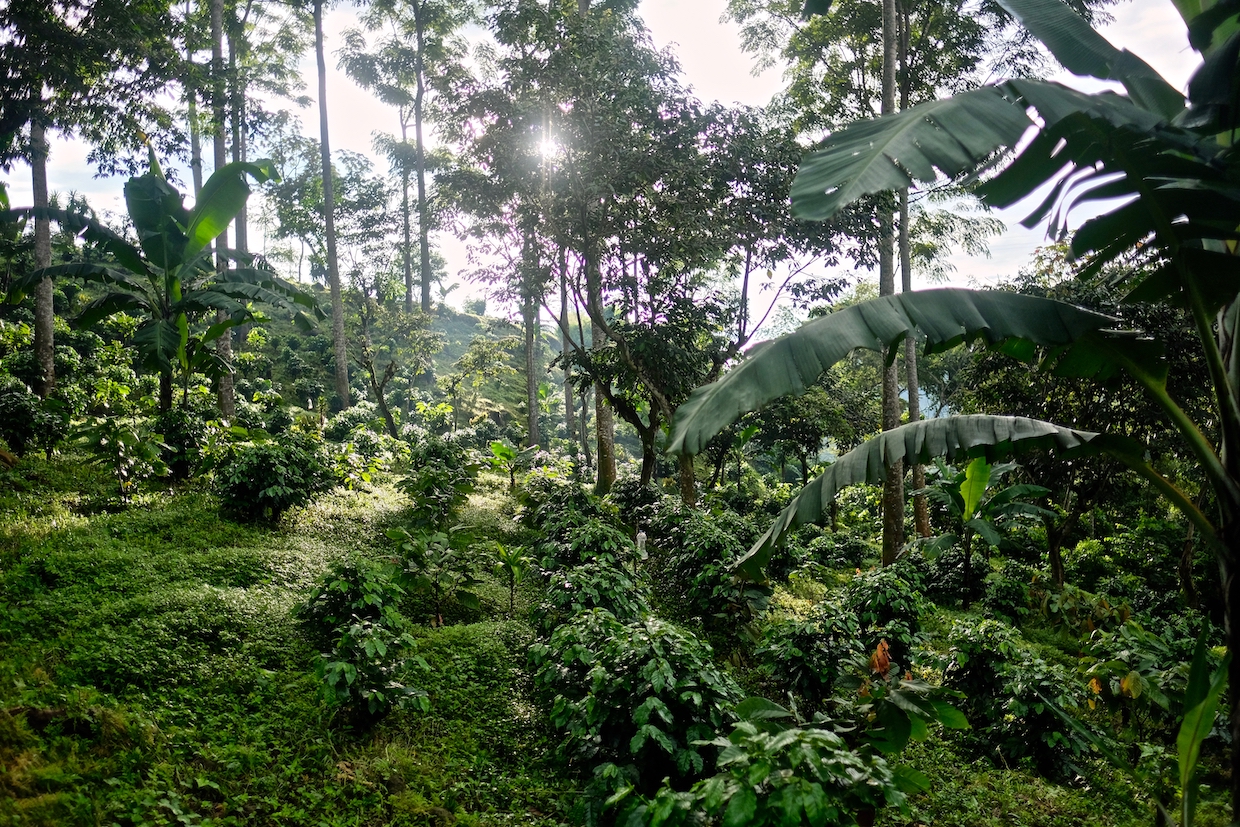 This arboreal version of sweating is the process known as transpiration. A single tree can transpire hundreds of liters of water per day, and a forest, with its extensive, layered leaf surface area, can transpire an amount of moisture equal to or exceeding that of a large body of water.

Another step is required to turn the transpired water into rainfall, and trees are once again the benefactors.

Trees transpire water into the atmosphere, producing precipitation and ice particles that take shape in the clouds. Not long ago, the prevailing belief was that small mineral particles served as the nuclei to catalyze ice particle formation. However, we now know that microbes, originating from the forests below, catalyze ice particle formation and trigger precipitation at higher temperatures than inert material like minerals. In other words, clouds don’t have to be as cold for ice nucleation, and rainfall can occur in a broader range of conditions.

Approximately 40% of precipitation over land originates from the evaporation and transpiration of water from plants.

Not All Tree Cover is Equal

In one of the more impressive feats of low-tech terraforming, forester and microbiologist Willie Smits famously reforested a 2,000-hectare area of clearcut Borneo forest using agroforestry. Six years later, Smits documented a 12% increase in cloud cover with a 25% increase in rainfall.

Forests don’t simply grow in moist areas; they create and maintain the conditions in which they grow by producing rainfall and shortening the length of the dry season.

When trees are removed from the landscape, the rainy season becomes sporadic, and less water is available for evaporation and transpiration, effectively turning off the source of rainfall. 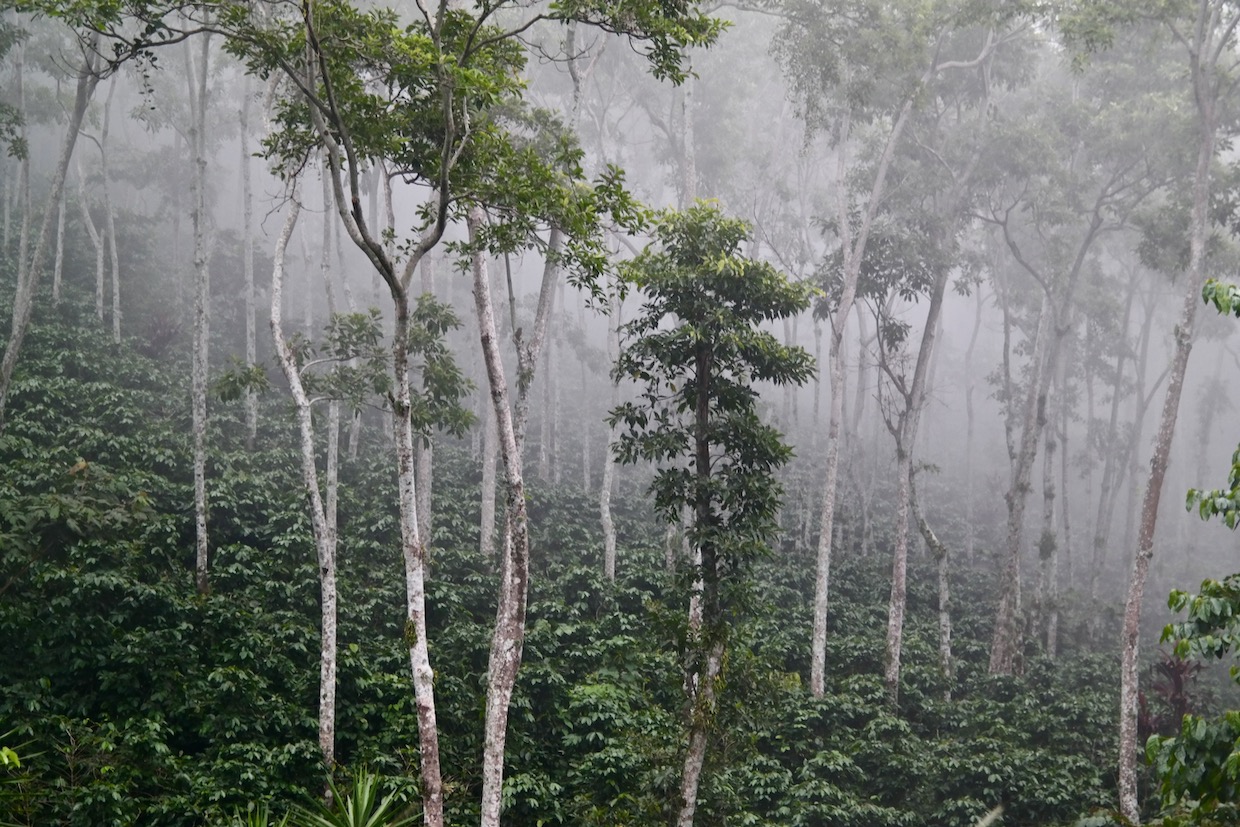 A key concept of the theory described above is that of the forest structure, not just individual trees. The action of trees seeding the rain through transpiration and microbial ice nucleation is the product of more complex forest structures and greater leaf surface area — not monocrop tree plantations.

While coffee has been planted as a monocrop with increasing furor in the past few decades, it is one of the only crops of economic significance that successfully grows in systems that mimic the natural forest structure and dynamics of tropical environs.

The benefits of growing coffee in an agroforestry system are vast, and they may just be the solution to some coffee farmers’ most pressing issues.

[Editor’s note: Daily Coffee News does not publish paid content or sponsored content of any kind. Any views or opinions expressed in this piece are those of the author and are not necessarily shared by Daily Coffee News or its management. Do you have a story idea for DCN? Share it here.]

How Much Caffeine in Caribou Bousted Sparkling Water? What to Know!