The new Be Bright Coffee bar in the Melrose neighborhood of Los Angeles. Photo by Stan Lee, courtesy of Be Bright.

Adding to the abundant sunshine this week in Los Angeles is Be Bright Coffee, a roasting company that opened its first brick-and-mortar shop in Melrose.

With a terrazzo stone counter, light birch wood shelving and interior colors that precisely match the brand’s online presence and packaging, the new shop offers a more consistent daily resource for fans of Be Bright’s weekly booth at the open-air food market Smorgasburg. 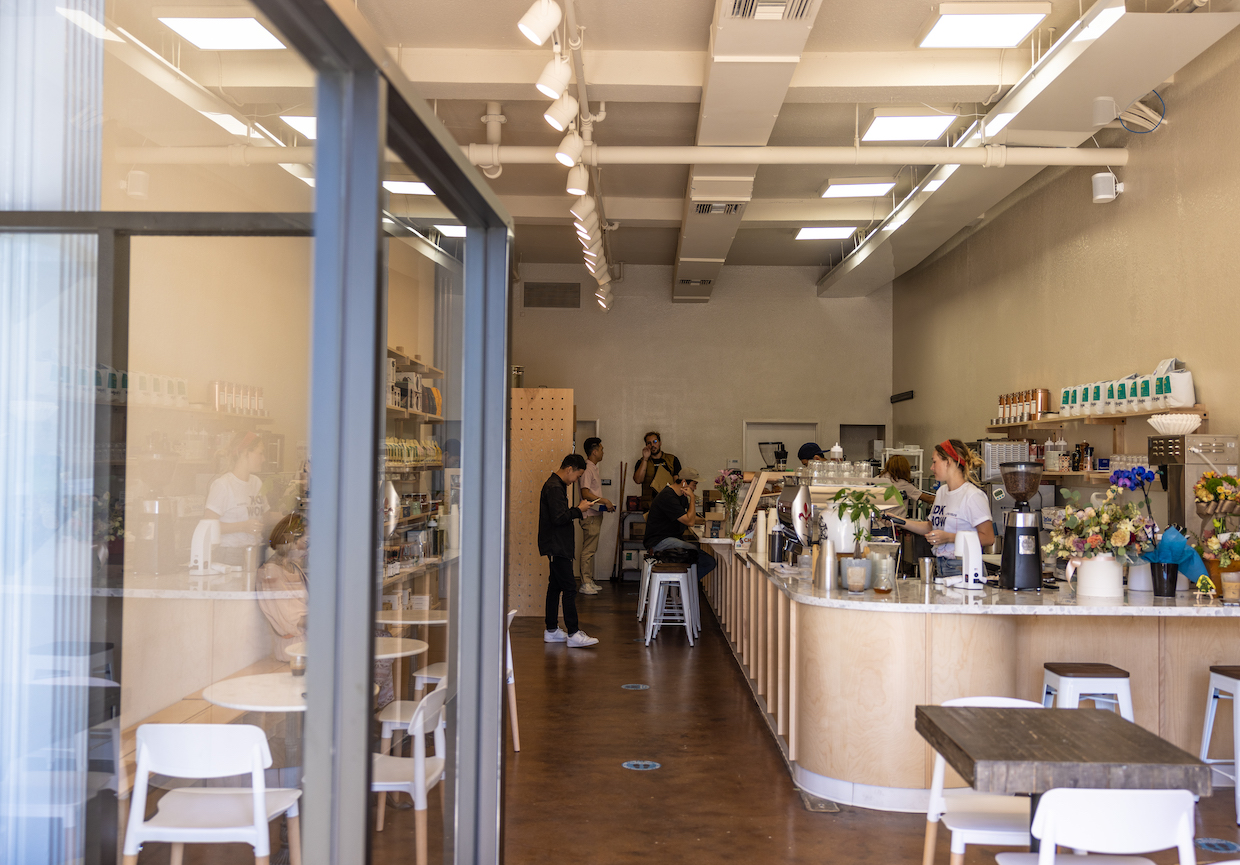 Inside the new Be Bright Coffee shop. Photo by Stan Lee, courtesy of Be Bright.

“Smorgasburg is where we really saw a tremendous positive response to what we were doing,” Be Bright Coffee Co-Owner and Roaster Frank La told Daily Coffee News. “We were constantly getting asked every week by our customers, ‘When are you going to open your store? When are you going to open your own space? We want to come visit you outside of Sundays.’ That’s the first time I was like, ‘Wow, maybe we should entertain the idea of opening a cafe, as people really like what we’re doing and it resonates with them.’”

For the company’s owners, Frank and Michelle La, the opening of the cafe represents a sweet new chapter in a life spent together in coffee. 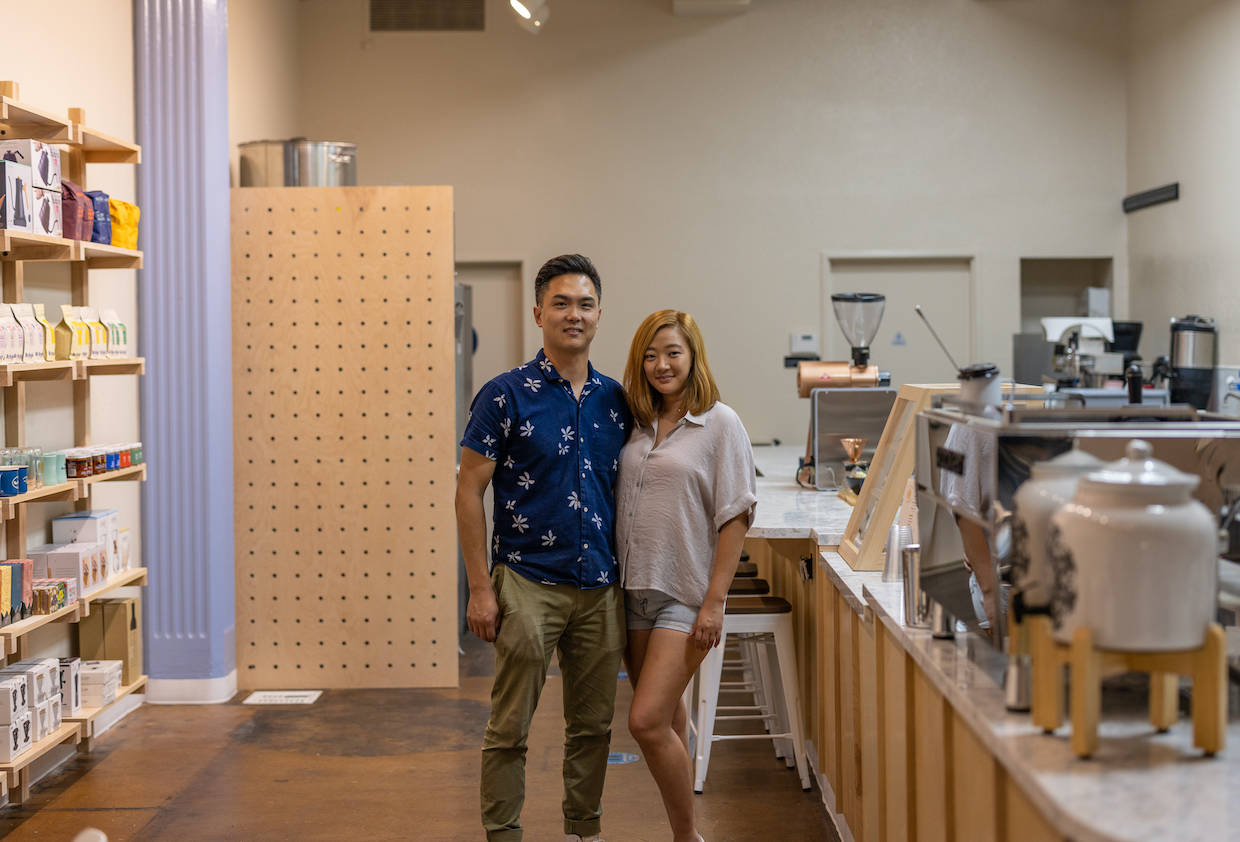 “The cafe space has always held a dear part of my life,” said Frank. “I’ve met a lot of my closest friends there. I met my wife at a cafe. She ordered a macchiato; at the time I was a baby barista and had this reputation that I wanted to be one of the best baristas in L.A., and she tweeted about how bad her macchiato was.”

Later on, Frank spent years training staff and opening cafes for other specialty coffee companies, including Southern California’s Copa Vida, from which he exited as director of quality and innovation just prior to launching Be Bright. 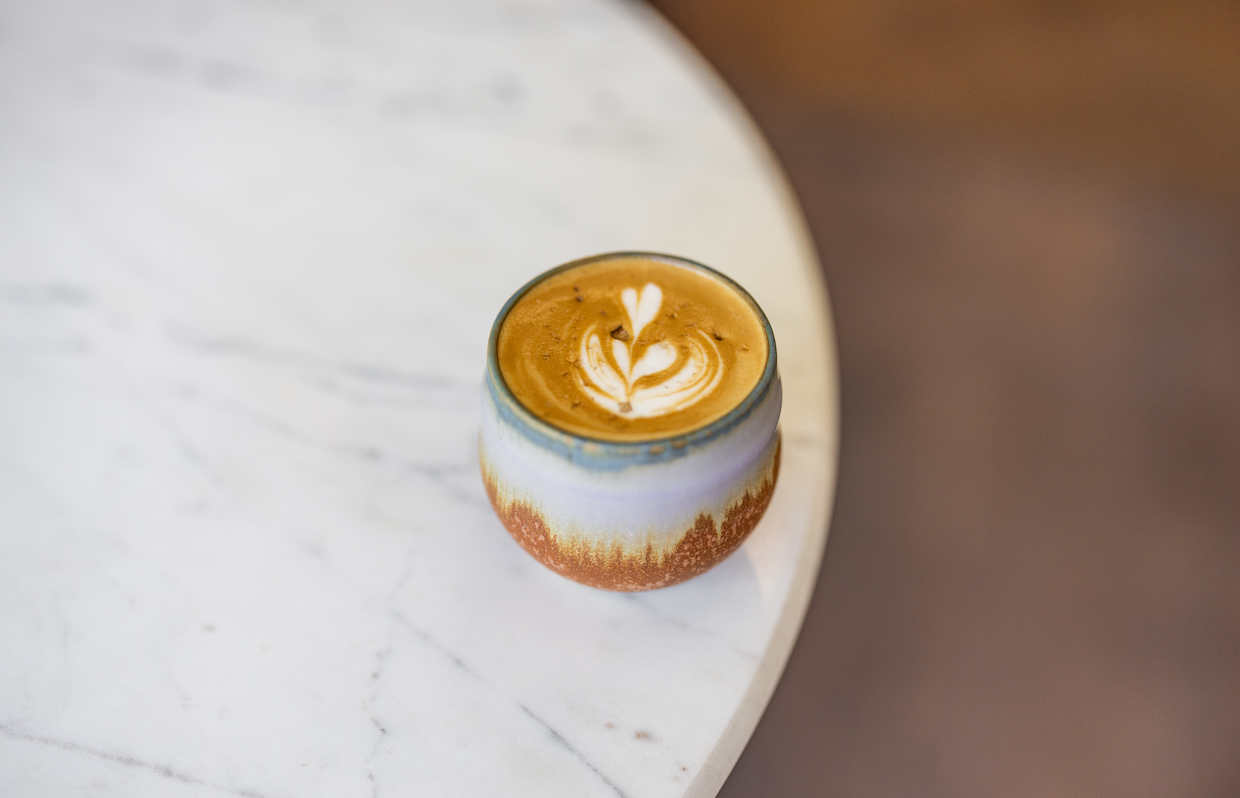 “I wanted to open a cafe because that’s all I knew, but then after opening a roastery, I really liked the more balanced lifestyle of having a roasting business,” said La. “And I knew I had enough reverence and love for coffee that I would dive deep into it and learn, and hopefully do a good job. Since then, I think we’ve done decently.”

Be Bright ranked third place in the preliminary qualifier for the U.S. Roaster Championship this year, while the company’s roasts also laid the basis for victory in the US Cold Brew Championships at the 2021 Coffee Fest in Anaheim. 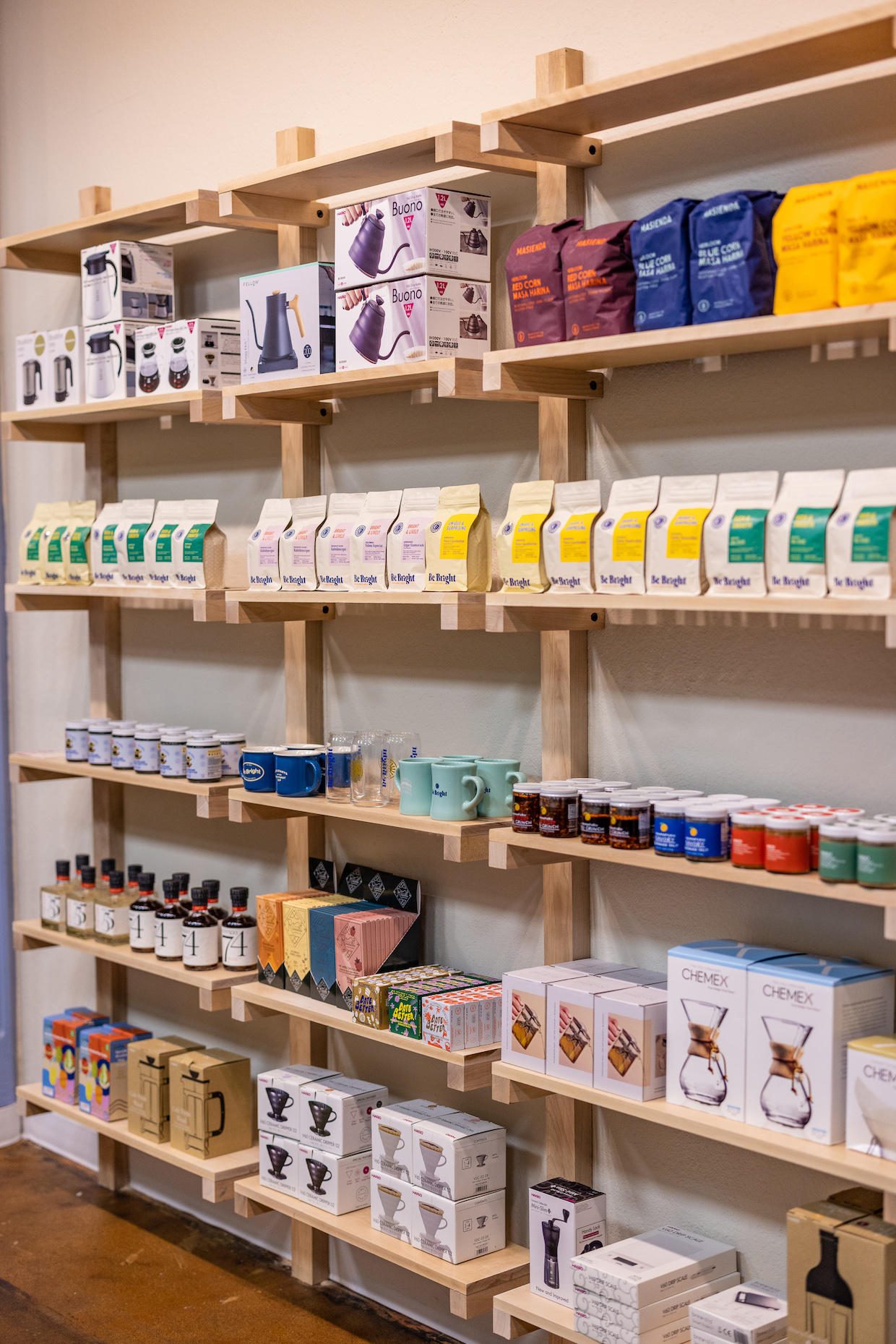 Online, Be Bright lives its motto “coffee made simple” by dividing its roasts into four approachable, familiar-sounding categories. At the cafe, the food menu continues in that vein with dishes focusing on a few pure ingredients.

“We’ve got three items on our food menu to start, and they all have four to five ingredients, max,” said Frank La. “It’s just really highlighting good ingredients and making it tasty.” 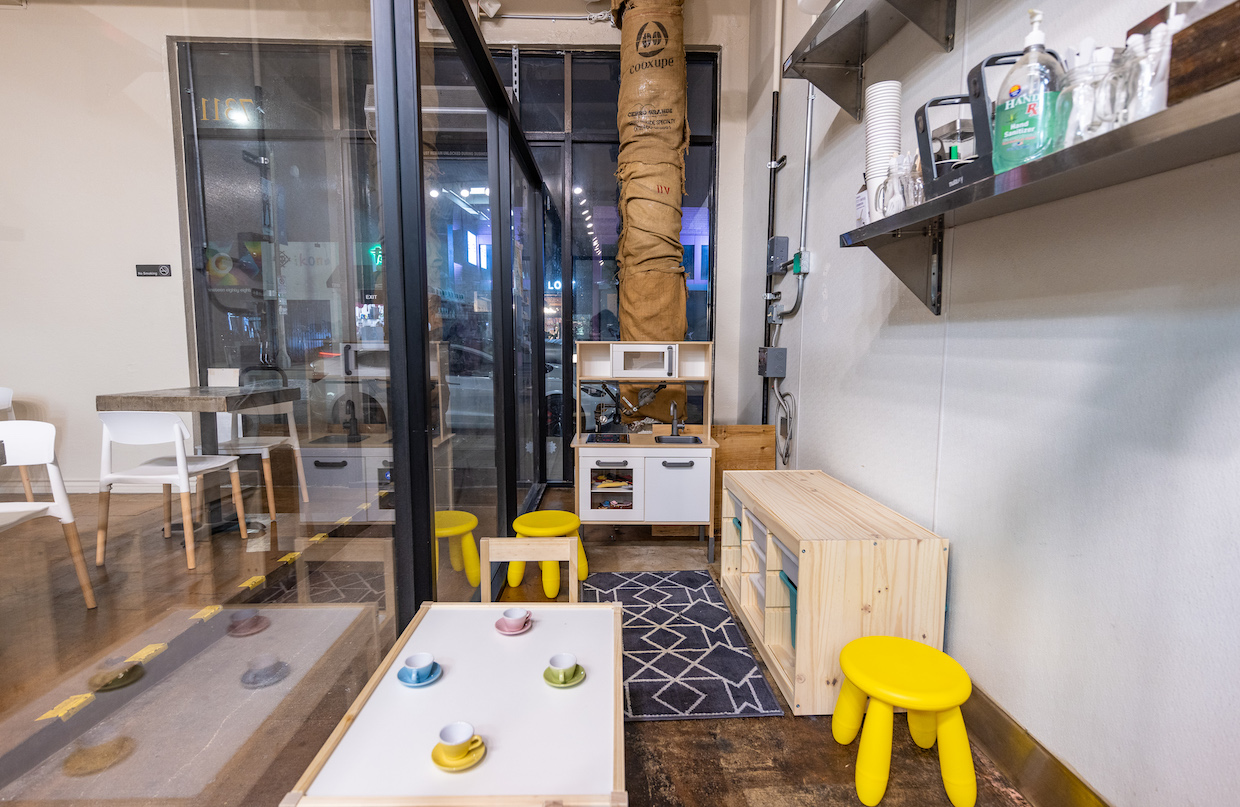 A kids’ play area in one corner of the cafe accommodates family needs, while a retail area features bagged coffees and non-coffee goods from local makers.

“Now more than ever, I see it’s such a symbiotic relationship between having a physical space and an online space,” Said Frank La. “We’re going to try to push to create this 360 of customers getting to take us home when they’re not here, and also people who have only experienced us at home getting to experience us in the physical space.” 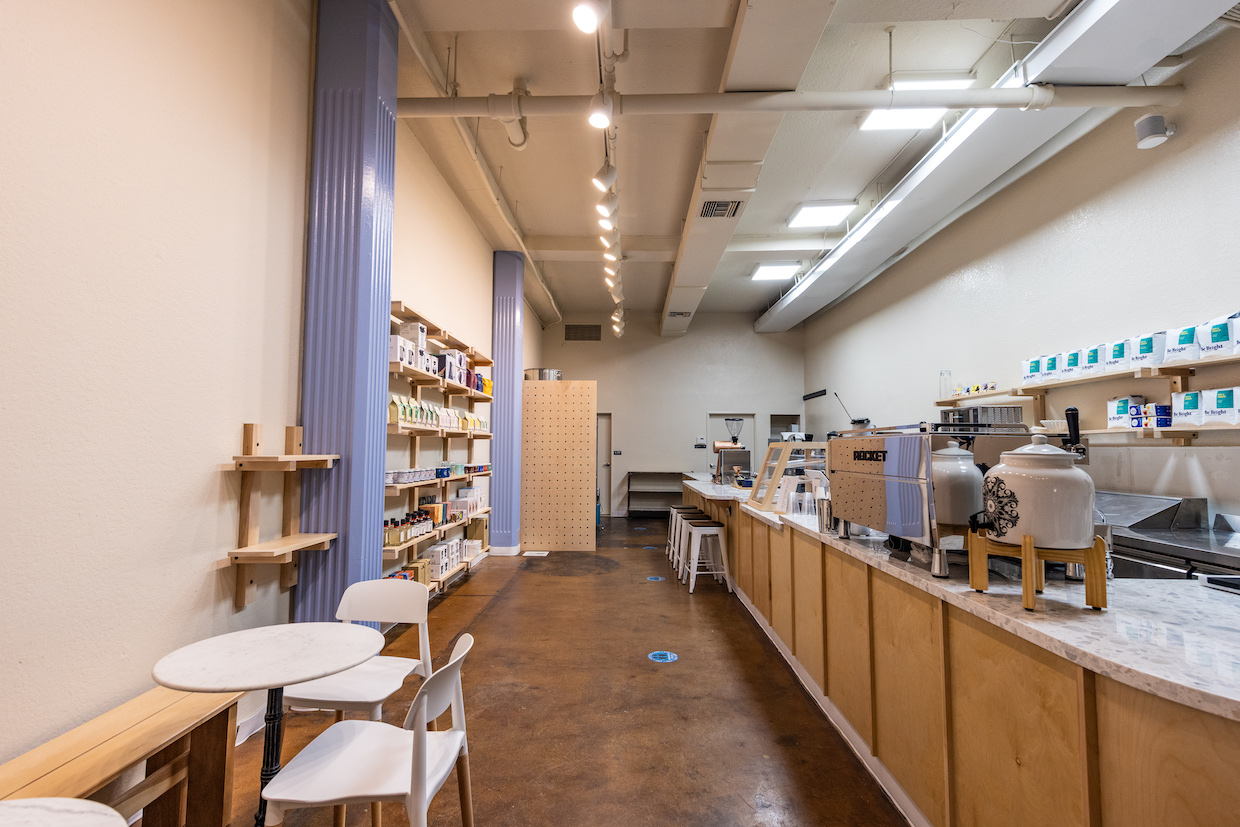 Be Bright is located at 7311 Melrose Avenue in Los Angeles. Tell DCN’s editors about your new coffee shop or roastery here.

Cupp – the harbour of flavours at Merwede Canal in Utrecht, The Netherlands