Sales of the forthcoming Pietro grinder are expected to launch in early 2023, with United States distribution coming through Espresso Parts. All images courtesy of Fiorenzato/Pietro Grinders.

The flat-burr Pietro design boldly strides astray from the conventional manual grinder format, in which conical burrs are turned by a top-mounted horizontal crank. A side-mounted crank on the Pietro turns the vertical rotating burr, then folds neatly into the aluminum body of the grinder when not in use.

The hopper holds up to approximately 60 grams of whole beans, which is a higher capacity than most manual grinders. 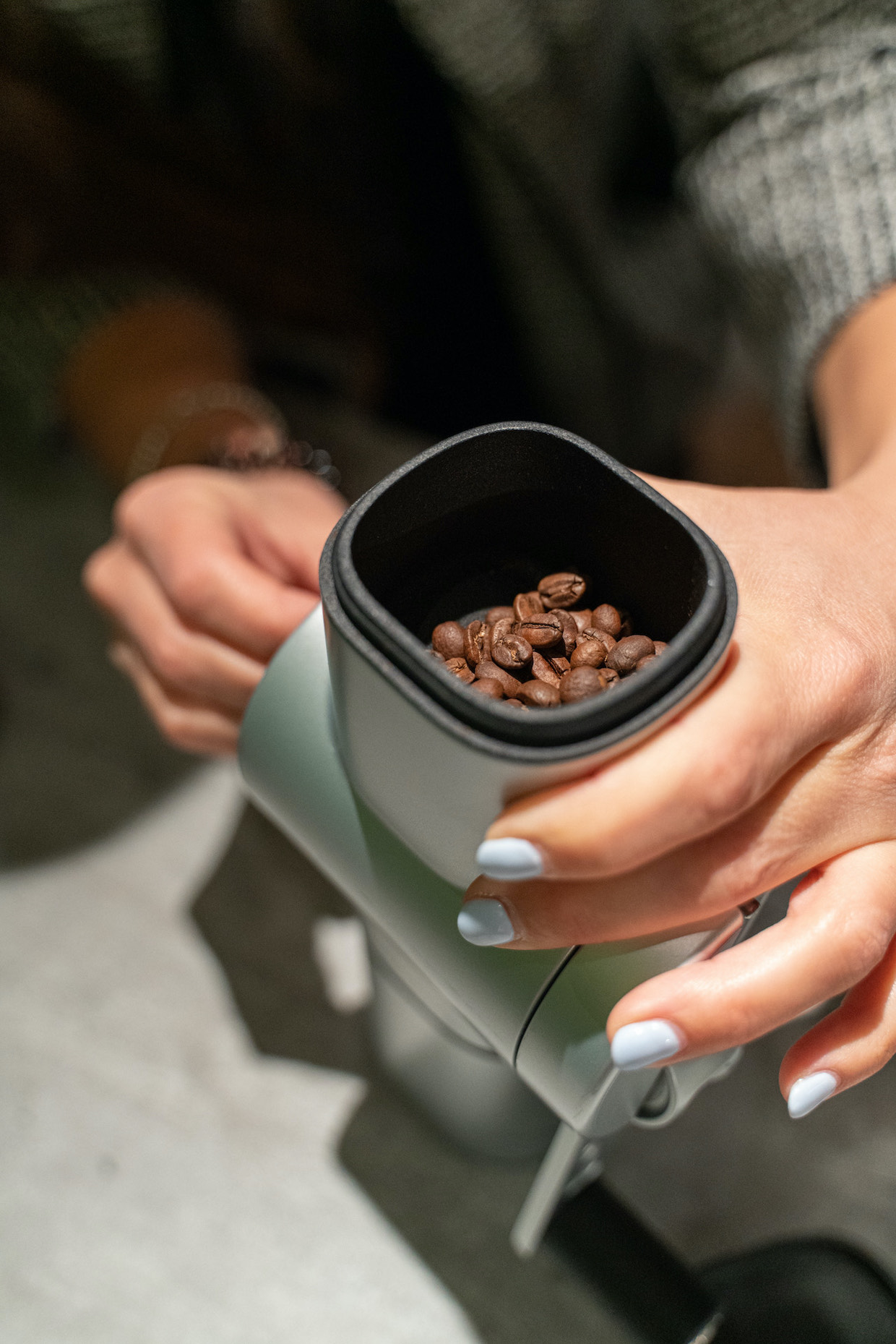 Burrs made out of Böhler M340 steel are designed by Fiorenzato specifically for the vertical manual grinding system. The company will offer two different burr sets for the Pietro, including multipurpose burrs intended for espresso and filter brew methods, and what the company is calling Pro Brewing burrs, intended specifically for filter coffee.

Adjustments to the grind setting are made through the turn of a stepless numbered dial on the back of the grinder opposite the crank. While output speed will vary depending on the user, the beans and the roast, the company said it grinds about as efficiently as most other grinders its size, averaging roughly 16 grams per minute at espresso fineness or about 30 seconds for the same dose for filter brewing. 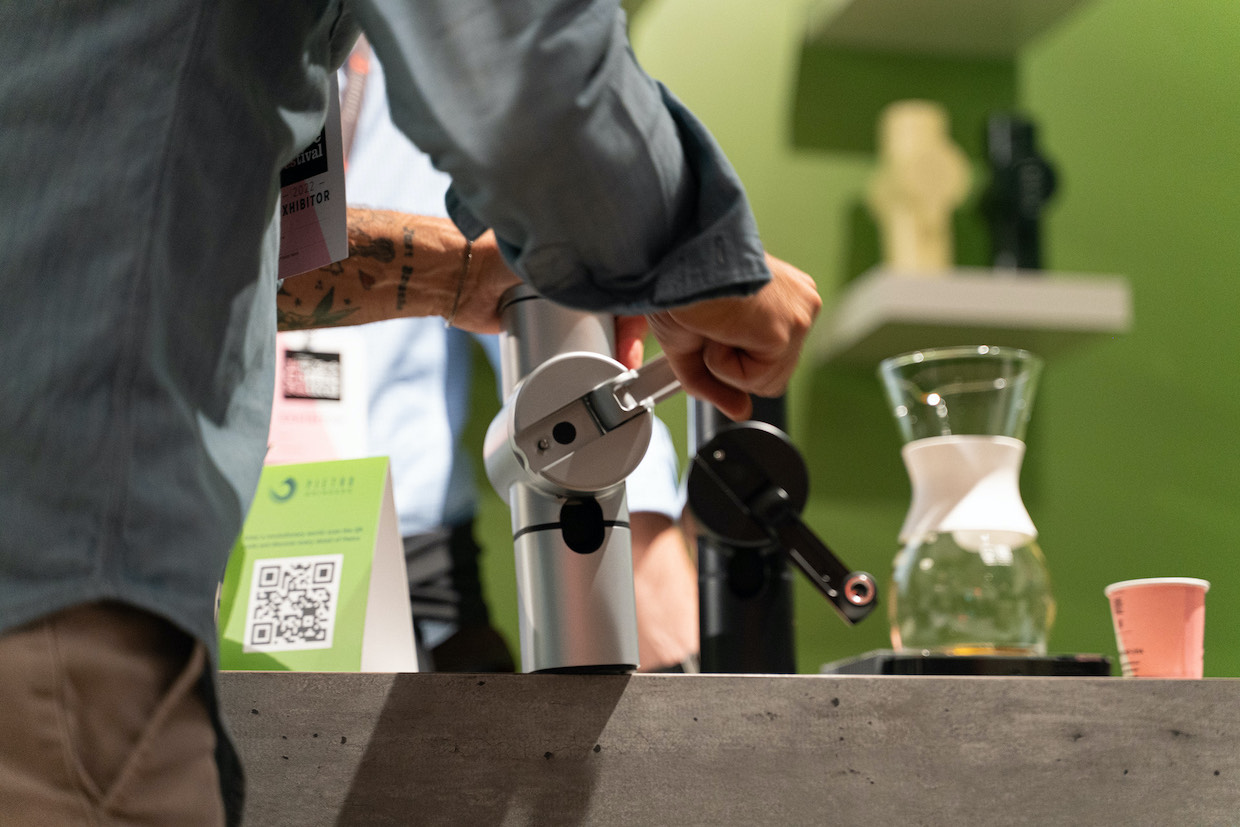 “The two core values of Fiorenzato, transmitted by the founder Pietro [Fiorenzato], have always been tradition and innovation,” Fiorenzato Marketing Manager Giulia Bagato told Daily Coffee News. “[The] Pietro manual grinder is a tribute to our founder, a far-sighted and enlightened person who has managed to achieve important milestones in the world of coffee grinders.”

Anti-slip material on the bottom of the grinder helps keep it stable on a tabletop or counter where a user may choose to hold it down while cranking. The hopper lid and ground coffee receptacle form air-tight seals within the grinder’s body, according to the company. The grinder will be available in a variety of bright colors. 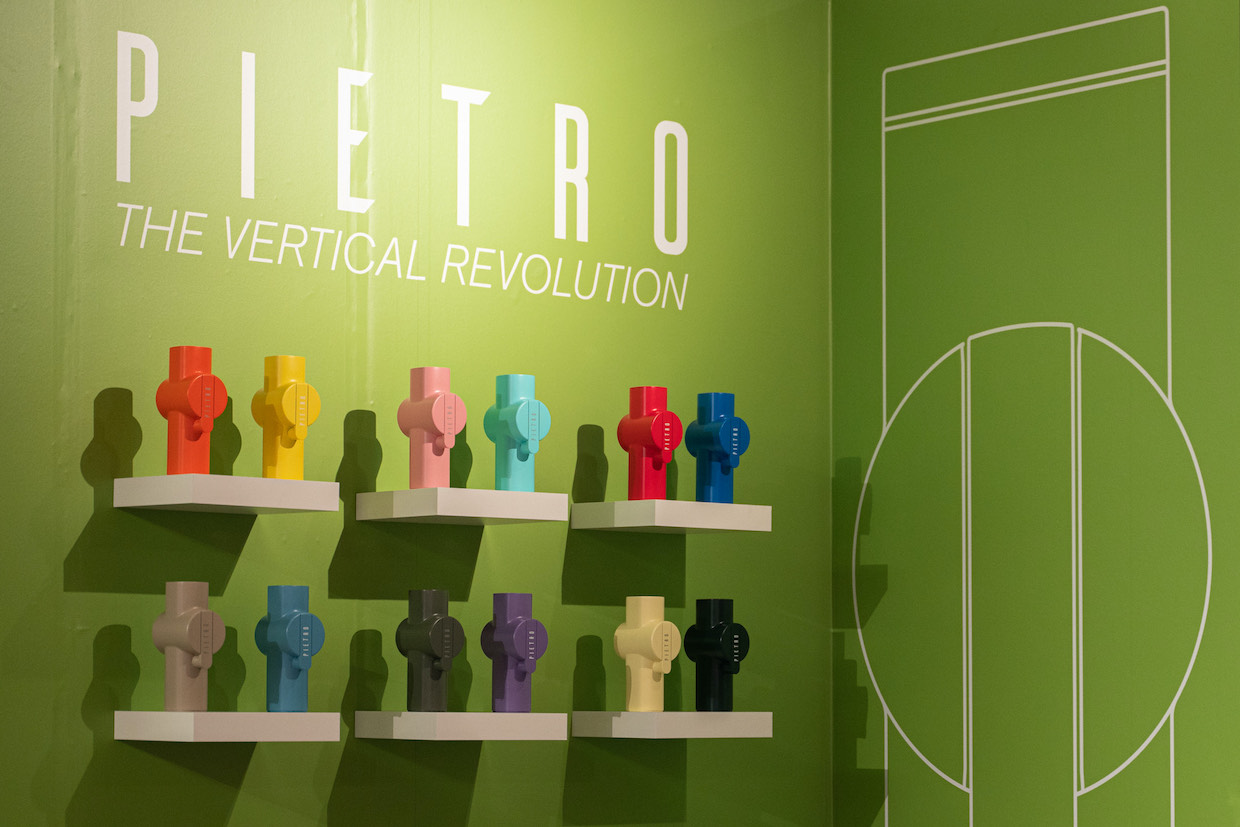 “The design is original and refined. We wanted to differentiate ourselves from competitors not only for the type of burrs and performance, but also for aesthetics,” said Bagato. “The design was curated and created by V12 Design, an important Italian designer who also collaborated with Fiorenzato for the restyling of the logo.”

As a company, Pietro Grinders is coming to life roughly 18 months after the launch of Fiorenzato Home, a sub-brand launched by Fiorenzato last year. Fiorenzato Home’s first product was the Allround electric grinder, representing the company’s first foray into the prosumer field of equipment. 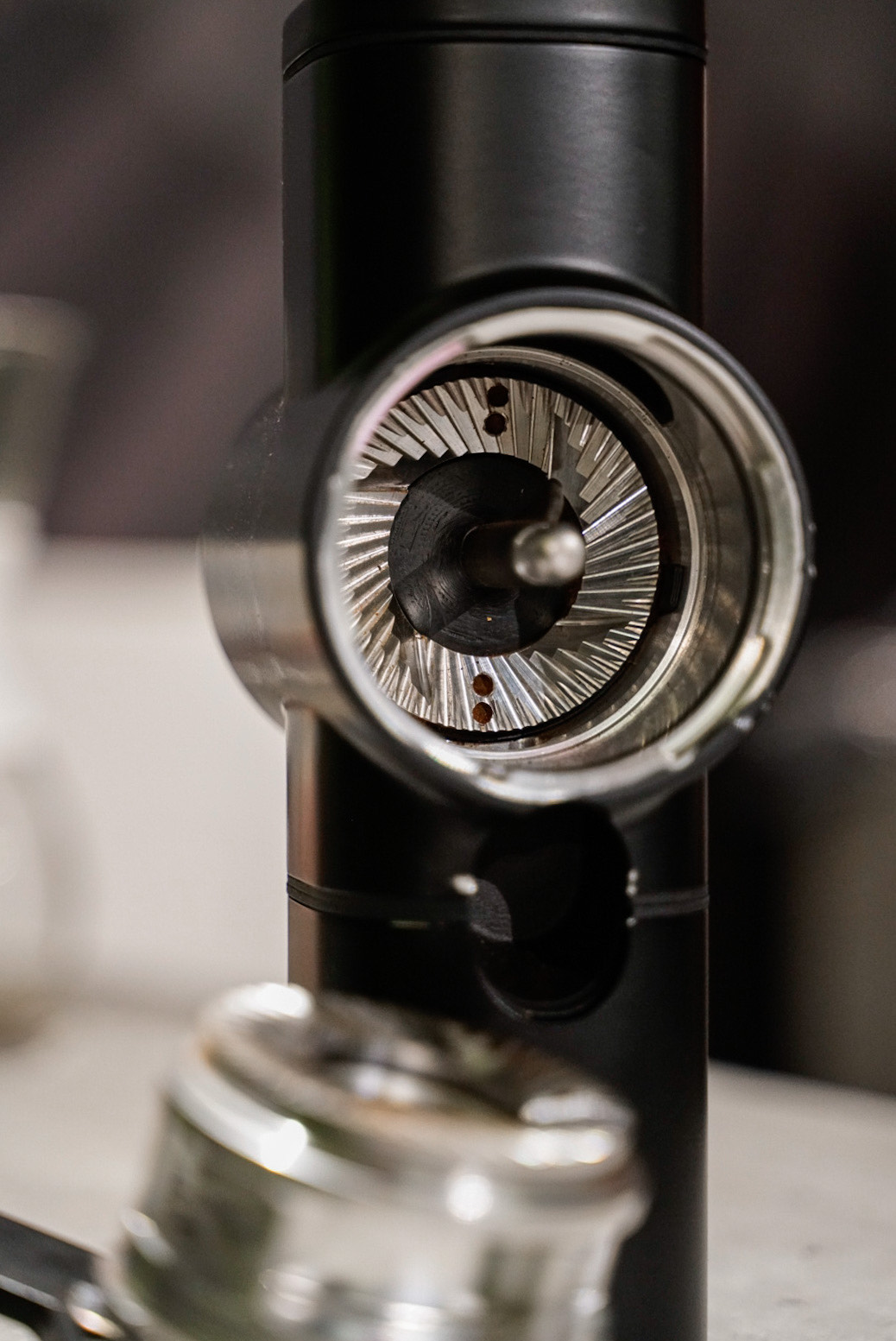 Said Bagato, “Pietro Grinders is a company in itself, which can count on Fiorenzato’s know-how, but which will make its way across different territories, channels and targets.”

Pietro sales are slated to begin in February 2023. The grinder will be sold in the United States by Espresso Parts, who also operates the recently launched Fiorenzato USA branch. The retail price of the Pietro grinder is slated to be roughly €370 ($366.64 USD as of this writing) including VAT. 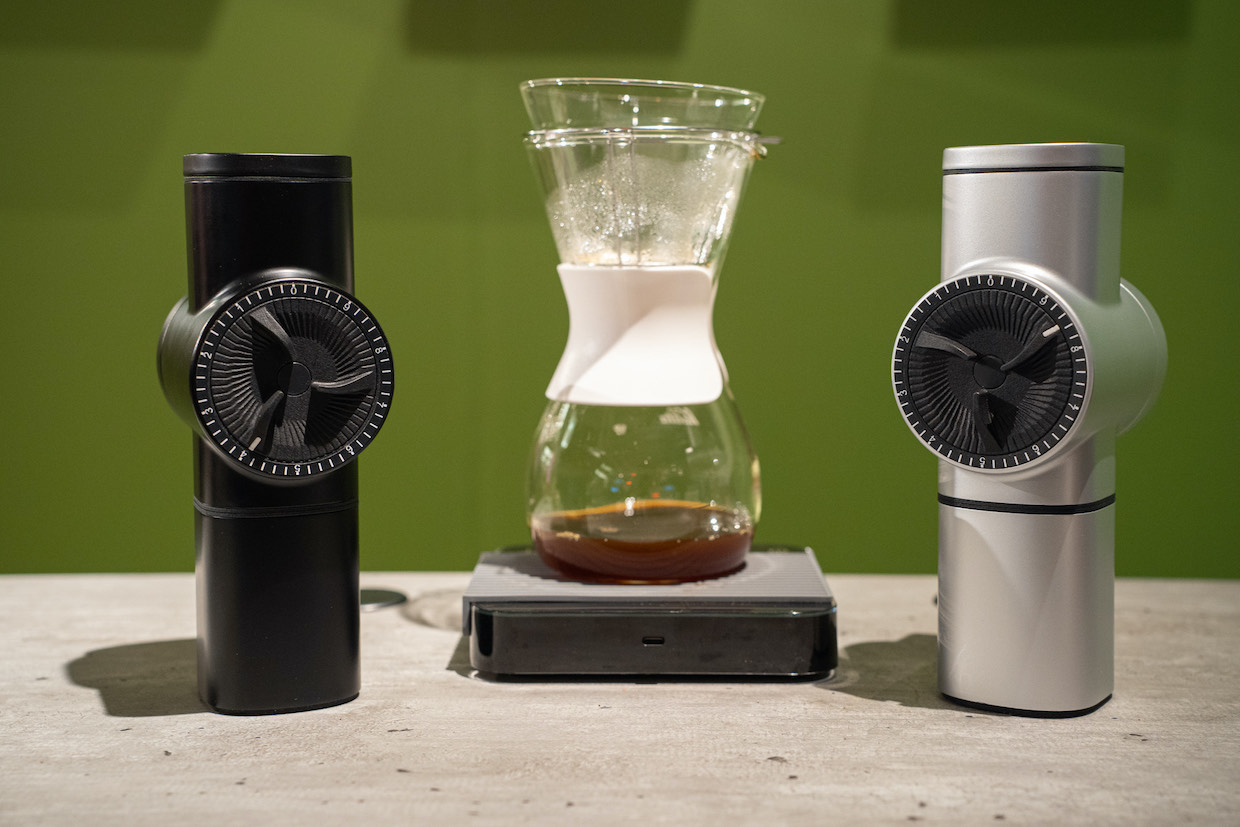 What Temperature Should Your Cappuccino Milk Be?